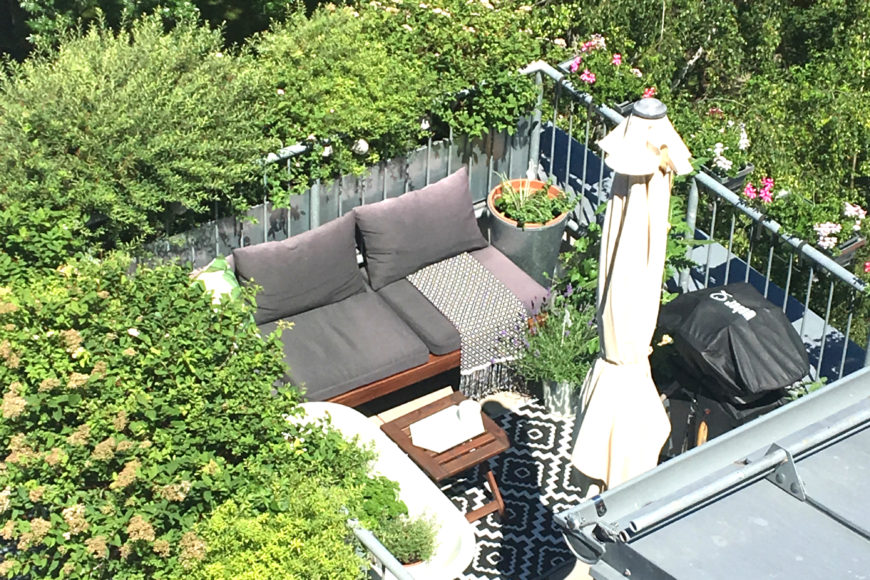 One of my very first rooftop showcases I visited, was the little terrace of Stephanie-Katrin, who is a young fashionista living in an two-people-household with her boyfriend. Stephanie-Katrin is from Ottakring, born and raised. The house that holds only two of 35 apartments with a terrace, is a pre-war building where the top layers have been built up subsequently. Obviously, because the apartment seems renovated and new. The little outside terrace catches the sun almost all day long, with a little more during midday. Perfect scenario for tomatoes and herbs. Stephanie-Katrin has been living here for eight years now. „Every year I try to rearrange something. At the moment there are too many plants here“, she laughs. You can feel almost immediately that the 30-year-old loves the outside and her own little „garden“, where around seven people can be seated. „Perfect for little parties“, she adds. And really, the lack of people being able to stare into her terrace, makes it even more appealing for private sessions. When I ask her about her decisions in plants, Stephanie-Katrin says that most of her plants are for one year only. „I can’t put stuff inside in winter and tomatoes and herbs won’t survive winter anyway.“ The little terrace space holds a few tomato plants that seem to to grow well due to steady sunlight. „I try to have different variations of tomatoes“, she points towards a rectangular pot. We both agree that round pots take way too much space. Cucumbers, chili and bell pepper are living next to them. On the other side a few herbs are placed in an old little enamel baby bathtub – Stephanie-Katrin’s father’s original baby bathtub, I learn. „And very useful to fill with ice cubes for beverages when you have a party“, she adds. On the other side of the railing the terrace was built with a 30 centimeter ledge, so Stephanie-Katrin had a special metal pot built and attached to it, which holds different kinds of bushes – makes the place even cozier.  We go up the on to the very top of the roof where you – theoretically – could built another terrace on top. The view is amazing, you can see almost the whole inner city from up there – and the beautiful terrace on the other side. It seems like a little oasis amongst concrete and roof tiles. „There are three big challenges on this terrace: First of all, it’s the wind. Second, the rain. If it rains too much, the water can’t drain fast enough. And third, when I am on vacation, my mom does not water enough“, Stephanie-Katrin says semi-jokingly. Also, it was a challenge to find fitting furniture. They decided, she tells me, to buy a lounger instead of three separate chairs or the more expensive three-seater-bench. I couldn’t tell until I was told. A cheaper way to use your space. The cozy atmosphere and the beautiful greenery really invite you to sit there with a glass of wine and just watch the birds. A phenomenal outside space with an even more charming hostess. Thank you, Stephanie-Katrin. 2
By iwonalaub
2
From the outer banks of Vienna 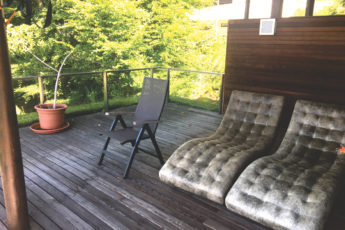